That’s the question new tech strategist Apjit Walia asks in a New Research Report, in which he looks at the interplay between the Post-COVID Tech Rally and the Tech Cold War, which have emerged as two of the most salient aspects of the current market dynamic.

And with tensions between US and China continuing to rise and spread to other parts of the world, the strategist conducts a top-down analysis of the impact on the Global Information & Communications Technology sector from a full-blown cold war.

The report finds that the ensuing demand disruption, supply chain upheaval and resultant “Tech Wall” that would delineate the world into rivalling tech standards could cost the sector more than $3.5 Trillion over the next five years.

But before getting into the details, we update on the current state of the DB Tech Cold War Index. As Walia writes, a nuanced observation of the tariff and geopolitical issues between the US and China over the past few years suggest they are primarily a smaller strategy that is part of a larger Global Tech Cold War.

To reduce the noise from the subjective geopolitical commentaries, DB created a systematic measure using machine learning to quantify the intensity of the cold war at any given point of time. It quantitatively analyses and tracks the sentiment of the Tech Cold War globally.

Not surprisingly, the DB Tech Cold War Index has been trending higher since 2016 with peaks coinciding with tit-for-tat measures by US and China on technology IP protection and countermeasures. It made an all-time high in April 2020 with the Covid crisis fueling tensions and has spiraled higher since then. The political headlines are matching the sentiment among the populace.

Recurrent surveys from April to June show that post-Covid tempers remain at elevated levels with 41%+ of Americans and 35%+ of Chinese stating they will not buy each other’s products. An election year in the US further complicates this geopolitical dynamic.

US and China have been engaging in an increasing capacity since the 1970s and the level of integration between the two global tech regimes is unprecedented. The integration is a complex demand and labyrinthine supply chain network that has taken 40 years to develop. DB uses a top-down approach to ascertain the level of revenues and supply chain links across the global ICT industries to China.

To analyze and quantify this complex co-dependent Tech relationship between the two countries is a challenging task, the bank surveyed Tech managements, CTOs, Industry associations and supply chain experts globally. The estimate on the total impact is by no means a solid target but a reference point that should provide context if the cold war escalates significantly and decoupling picks up momentum.

The bank’s strategist quantifies the downside impact on the sector from a material escalation of the tech cold war, categorized under the following three broad categories:

DB looks at a range of downside scenarios including one of a full-fledged tech cold war and estimates the total impact on the ICT sector from the three factors over a 5-year period to be around $3.5 trillion. And while the bank thinks that 5-8 years is an appropriate time period some supply chain experts believe the time to relocate the cluster of supply chain networks could take as long as 10 years.

Globally, China has about 13% of revenues of the ICT sector amounting to around $730 Billion per annum. However, a significant part of this is demand from the Chinese tech sector that is re-exported after some value-add, assembly and packaging (“re-export demand”), this constitutes supply chain risk.

To analyze domestic end demand from China that could be at risk if tensions escalate leading to IP restrictions, product bans and export-restrictions, DB looks at the underlying ICT industry groups and their varied re-export mixes from China. The range varies widely with Telecom services sectors that have minimal revenue exposure all the way to software services that have pure domestic Chinese consumption (low or no re-export).

The weighted average of the re-export demand mix for the whole ICT sector comes to 45%. Stripping that out of the total ICT revenues, one gets 55% in current organic Chinese end-demand or $400 Billion in revenues. In the worst-case scenario of a full-fledged tech cold war, the ICT sector would stand to lose these revenues.

A transition out of Mainland China could take 5-8 years to achieve success. Lack of infrastructure, clustered networks and skilled labour in other countries versus China are major obstacles.

Vietnam, India, Malaysia, Indonesia and the Philippines are the primary targets for this transition but most of them would need significant infrastructure upgrades to catch up with the Chinese supply chain cluster strength.

The supply chain risk of the ICT sector is estimated to be the built-up book value that is exposed to China that would require relocation in the event of disengagement. Although book value provides a decent lower bound measure for the capital deployed in hard assets, it does not fully account for the economic value of the supply chain network, which may be quite costly to rebuild.

To arrive at an estimate of the book value that is exposed to supply chain facilities in China, DB analysed the revenues and Export/Import ratio of various categories of Tech goods. The book value of the ICT sector tied to China comes to approximately $500 billion.

The average cost of rebuilding the supply chain will be approximately 1.5 to 2x of the book value based on feedback from Tech management and supply chain experts. Using a sustainable capex rate, it would take 5-8 years to relocate the supply chains. The cost of a transition over a five year period would come to around $1 Trillion.

On top of the demand disruption and supply chain upheaval, it would be unavoidable for Tech companies to operate efficiently in a large part of the “Non-Aligned” world without complying with the two rivalling global standards that would come up as the cold war heats up.

It would mean having to deploy two different communication and networking standards across several geographies to ensure interoperability. In this new world order, these non-aligned countries would require companies to have dual-standard compliance to operate there.

Loss of interoperability of devices across geographies for the consumer. For example, high-end smartphone networking gear makes up ~10%-15% of the bill of materials. If phones had to support dual standards that cost could increase by ~30-70% and can add close to $100 for the end consumer.

For lower-end handsets, costs would be high enough that manufacturers would probably choose to cater to a single standard based on geography. Corporations’ compliance with different data localisation, privacy rules as well as supporting multiple networking standards would increase costs by 2-3%.

The Tech Wall’s impact on the ICT sector could range between 2-3% in incremental costs (capex, labour) or $100-$150 Billion per year. After some time, these costs would get absorbed as economies of scale kick in, but that would take about 5 years to average out.

There are also going to be cross effects and second-order effects.

In summary, while DB estimates the potential impact of a full-blown tech cold war at $3.5 Trillion over a five year period, the actual outcome will obviously be path-dependent on how both countries approach the economic and geopolitical trade-offs.

The following chart shows ICT industry group’s revenues to China, this includes sales of goods that are re-exported out of China after assembly for end consumption elsewhere.

DB measured sensitivities of these industry groups to escalations between US and China. Using the DB Tech Cold War Index, the bank identified 15 major periods of sustained escalation in news intensity.

These are periods where the geopolitical tech dispute news flow picks up from low initial levels and continues to grow in intensity until it reaches a peak, often coinciding with major news events or steps on either side. DB then computed the correlations of these global ICT industry stock returns with the DB Tech Cold War index over these episodes. 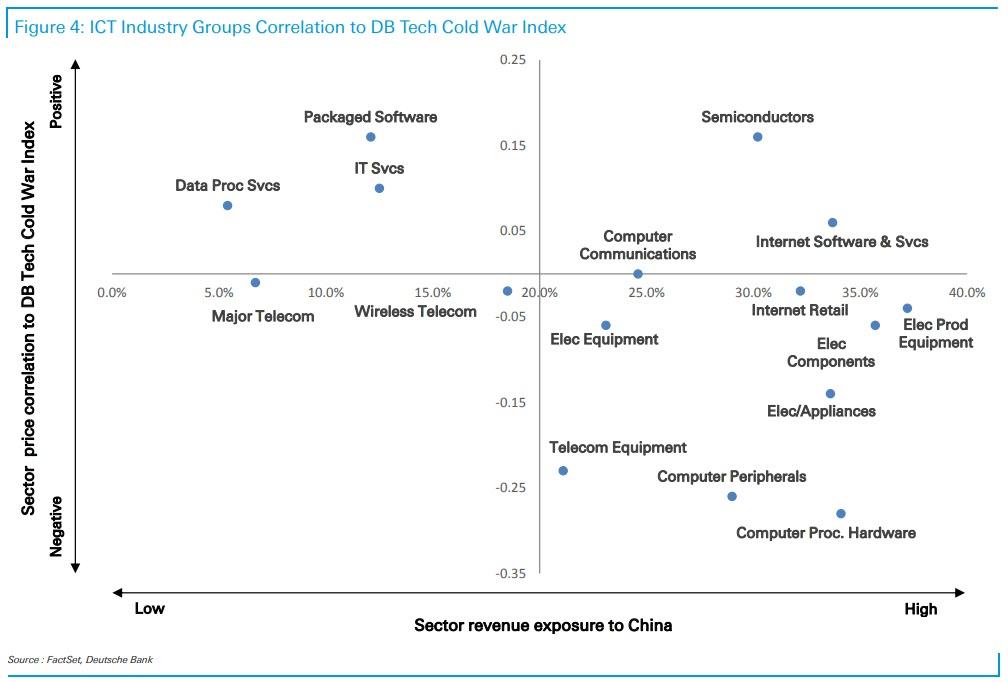 As the chart shows, the market is quite efficient. Industries in the right bottom quadrant are the ones with higher revenue exposure to China and have the most sensitivity or negative stock price correlation to rising tensions.

The hardware industries which predominantly have both revenue and supply chain dependence on China respond sharply to escalations. Industries with lower revenue exposure to China display defensive characteristics during rising tensions and fall in the top left quadrant.

The one surprising exception to this trend is the Semiconductor sector, standing out in the top right-hand quadrant. Contrary to consensus opinion, the analysis shows that semiconductor stocks are reacting positively to rising cold war tensions despite the sector being the biggest point of contention in the conflict and high sales exposure to the Chinese market.

This could be driven by several factors. One of the explanations is inventory build that occurs when tensions rise and companies over order as they are concerned about supply chains clogging up. These orders could be viewed by the market as incremental demand.

Another factor could be the market considering the sector as defensive given its long term secular potential and the structural growth becoming less sensitive to business cycles. With digitization ramping up globally in the post-COVID tech ramp, this structural dynamic of the sector starts to become self-reinforcing.

Anticipated policy support from governments given the centrality of the sector to nation-states in geopolitical tech relevance is also touted as a driving factor in multiples. Clearly, Semis are key to retaining tech supremacy and form the backbone of any AI or Software enhancements to institutions and countries.

However, there remains one tail case scenario and that is in the event of disengagement and escalation of the cold war, Semiconductors will see significant market share and supply chain disruption that will be too big to be offset by government policy support and central bank liquidity. This scenario does not seem to have been factored in the Current Market.