Napoleon Bonaparte said, “Let China Sleep, for when she wakes, she will shake the world.” China has clearly awakened and given its recent assertive posture in the global community, particularly in the Middle East.

Many argue that perhaps the West would much rather China go back to sleep. China has actively engaged countries in the Gulf Cooperation Council and in particular the United Arab Emirates (UAE) and the Kingdom of Saudi Arabia (KSA).

Both countries have found an eager participant in China, which has sought new economic cooperation under its Belt & Road Initiative (BRI). However, a growing fondness for China could very well put the GCC States in the crosshairs of US-China rivalry making it very tricky for them to balance their economic partnership with China and their national security allyship with the United States.

“Let China Sleep, for when she wakes, she will shake the World”

An earmark of the developing relationship between the Arab States and China stood out in 2014, when President Xi Jinping of China laid out a formal plan for the advancement of Sino-Arab cooperation, referred to as the 1+2+3 framework. Energy, Infrastructure, and Trade & Finance were identified as the three key pillars.

Among large economies, China’s energy security is uniquely vulnerable because of its high dependence on the Arabian Gulf. We have seen this playbook before and China can’t bite the hand that feeds it, however at the same time, the transiting of energy that happens through the Gulf occurs in a paradigm of global trade largely administered by the US navy and through the US dollar.

To use an analogy here, to the Gulf States, the United States is akin to a doting father whilst China is the lavish wealthy uncle. A foothold in the Gulf is a crucial step towards alleviating some of its inherent vulnerabilities, and China has pivoted strategically.

China’s significant domestic energy imports from the region are evidence of a growing interdependence with the GCC to fuel its insatiable economic growth, especially in light of Covid-19. During 2019 leading into 2020, OPEC constituted the majority of supply (55%) of China’s crude oil imports.

China imported its highest-ever volume of crude oil in May of this year where imports from the world’s top oil exporter, Saudi Arabia, nearly doubled to the highest on record.

The Growing cooperation between the Kingdom’s national oil company, Saudi Aramco, and Chinese state-owned energy companies epitomizes the coordinated effort being made by both countries to strengthen commercial ties.

In 2016, President Xi of China and the Saudi King Salman also oversaw the inauguration of a giant $10bn refinery at the Saudi port city of Yanbu, a strategic location along the Maritime Silk Road.

This decision to improve and strengthen economic relations with the Kingdom was clearly a strategy to hedge and diversify economic ties as a result of the Trump led US-China Trade War, which has endured despite his touted “great” relationship with Chinese President Xi.

As part of the “Phase One” trade agreement, China had agreed to increase energy product purchases from the US by US$52 billion over the next two years, which would average out to US$2.2 billion per month for 2020. However, China is yet to meet these targets.

Where China is Investing in the Middle East 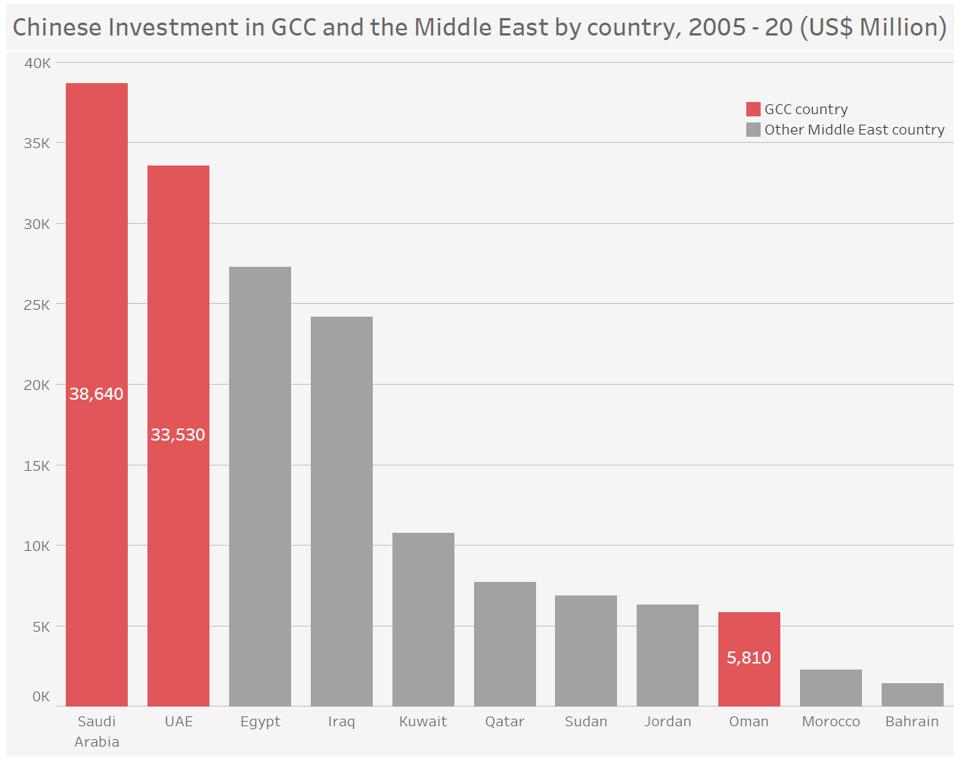 In 2017 and 2018, China and the UAE also further enhanced their energy ties as State oil companies from both sides signed a multitude of agreements.

China has also made similar ventures in Oman. China’s State Grid company recently agreed to buy a historic 49 percent stake in Oman’s Electricity Holding Company – which is thus far the largest Chinese investment on record in the Gulf country.

In addition to China’s interest in the Gulf region’s energy reserves, another noteworthy investment trend has been the surge in the influx of Chinese money in the infrastructure projects across the Gulf countries drawn by the region’s investment-friendly environment and geostrategic location as an increasingly indispensable artery of global commerce.

Accordingly, Chinese firms have committed hundreds of millions of dollars to these projects. For their hosts, Chinese investment can act as the catalyst that kick-starts diversification and leads to a plethora of local construction activity. This investment is a welcome development at a time when governments are seeking austerity.

According to the Heritage Foundation, Chinese companies tendered an estimated $30bn worth of contracts in the Gulf countries between 2005 and 2014. In Saudi Arabia, a grand fast speed railway project connecting the city of Jeddah to holy sites of Mecca and Medina has been undertaken in cooperation with Chinese firms.

In Dubai, a Chinese-Saudi bid secured the contract to construct the extension for the Mohammed bin Rashid Al Maktoum Solar Park. In Oman, a grandiose 11-hectare “Chinese-Omani Park” is being built in Duqm, 550 km south of the capital city of Muscat.

Amongst the aforementioned projects, Duqm stands out as the primary Gulf port not in the Strait of Hormuz region, which would make it a primary transit point in the event of any disputes with Iran. Unsurprisingly, it is also China’s primary point of focus in Oman.

Reimagining the Chinese Renminbi as a Global Reserve Currency

Sustained foreign investment into Chinese markets could elevate the adoption of the Chinese Yuan , pushing it to become the third largest reserve currency in the world -only behind the U.S. dollar and the Euro, Morgan Stanley MS -0.8% analysts predicted in a report distributed in early September.

In addition to energy and infrastructure cooperation projects, China and the GCC States have also worked on vastly improving their trade and commercial ties. Chinese financial establishments have grown their presence in the Gulf region, facilitating the exchange of local currencies with Chinese Yuan and also expanding Yuan financing options. The United Arab Emirates has been the hallmark for such activity since signing an MoU in 2015 for the establishment of a Yuan clearing center in the Gulf country.

Furthermore, the central banks of the two countries also renewed a three-year $5.2bn agreement to reduce the cost of currency exchange by avoiding the need to convert local currency into dollars. While China is a long way away from being able to effectively de-Dollarize its financial system, the groundwork is being laid for establishing a Yuan centric payment system, a particularly practical step given the United States’ recent moves to limit Hong Kong’s access to the Dollar.

The scale and scope of the flagship Chinese Belt & Road Initiative is a captivating scaffolding for opportunistic state and private owned Chinese companies to clasp on to.

However, the rapid expansion of these projects shows the growing relevance of the BRI in the Arabian Peninsula and illustrates rising Chinese engagement and soft power influence in the region.

China’s hunger for oil has pushed it toward a long-term presence in the Gulf, securing access to energy and capitalizing on the United States’ growing disinterest from the region stemming from fatigue and effective energy independence. Can the Chinese government be a stabilizing force for the benefit of the region in the way the US has been whilst imposing minimal costs on its hosts remains to be seen.

China’s checkered past of dollar diplomacy should give the resource rich states reason to entertain Chinese overtures more cautiously, whilst also pressing forth with much needed reforms to make their markets more attractive to traditional, more returns oriented FDI.

While the new investment into this region brings in much sought after FDI, the countries of the Gulf region would fare well to learn from the past experiences of other countries that have sought Chinese investments.

At a particular disadvantage are nations with weak financial and legal institutions that often find themselves in the unenviable situation of being forced to accept Chinese investment on egregious terms after failing to attract sufficient commercial interest or foreign aid from lenders of last resort such as the IMF.

A prime example of this situation would be the nation of Sri Lanka , whose combination of corruption, fiscal mismanagement and strategic location on the horn of India facilitated a sizable influx of Chinese investment. Commenting on this, Afshin Molavi, a Senior Fellow at the Foreign Policy Institute at John Hopkins University School of Advanced International Studies, said: “China’s BRI is an evolving process.

While state-owned entities investing in countries with weak finances can pose dangerous debt traps, there is no evidence to suggest that creating these debt traps to take over infrastructure is the goal of the Chinese government. Still, the fact of the matter is this: when governments become more and more indebted to China, they are likely to align more geopolitically with China.”

At particular risk would be nations such as Bahrain & Oman whose weak fiscal institutions would potentially leave them more vulnerable. Steve Cook, Senior Fellow for the Middle East & Africa at The Council on Foreign Relations agrees with the assessment. He notes, “The Chinese are not just targeting the relatively weaker state of the region for investment, however.

Those countries may be more susceptible to Chinese influence because they need Chinese help, but Beijing has not discriminated in seeking ties with both weaker states and those with relatively more capacity like the UAE and Saudi Arabia.”

History has Its Eyes on You

In the famous Broadway show Hamilton, the main character Alexander Hamilton’s future is defined by the friends in his life which at times he cooperates and at other times competes with. In a similar vein, the intricate relations between the US, GCC (Gulf Cooperation Council) and China are emblematic of both strategic and cooperative objectives.

As both the GCC (Gulf Cooperation Council) powerhouses Saudi Arabia (KSA) and United Arab Emirates (UAE) seek to diversify their economy and attract more foreign investment, enhancing and bolstering trade and economic relations with other regional powers has become a core priority.

One of the most defining moments of Alexander Hamilton’s life involves making a choice on whether to join the revolution or not. In the same way, the GCC, China, and the US have strategic choices that could redefine history.

Given the Gulf’s inherent reliance on the security umbrella of the United States to establish an effective deterrent with Iran, the GCC States may inevitably find themselves engaged in a balancing act due to increased animosity between their primary security and commercial benefactors.

Afshin Molavi is a careful optimist on the matter: “For the most part, GCC governments have not been forced to choose sides between China and the United States. If that day were to come, it would not be an easy choice … GCC states are heavily reliant on Asia for their economic growth, but still heavily reliant on the United States for their security.”